The Battalion organization has always existed in the US Army, though its size and role has differed over time.
The term Infantry "Battalion" has evolved to mean an organization comprised of 3 or 4 Companies of Infantry
and additional supporting units, and is directly subordinate to Regimental Command.

From around the beginning of the twentieth century to 1963 the 1st Battalion 22nd Infantry traditionally consisted
of Companies A, B, C and D of the 22nd Infantry Regiment. During that time the structure of Battalions within the Regiment
was formally adhered to; however, before that time, Battalions were formed as needed, without regard to any formal structure.

A great deal of the early history of other Battalions of the Regiment is therefore presented on this website.
Beginning with the year (circa) 1966 only the history of 1st Battalion is presented.

The 22nd Infantry Regiment was part of General Winfield Scott's Brigade in 1814. Because of a shortage of blue cloth, the Brigade went into battle
against the British at Chippewa, wearing jackets made of the only cloth available, in a "buff" or gray color. Because of their gray jackets,
the British commander, Major General Phineas Riall, mistakenly supposed them to be local militia.
However, as the 22nd and other units of the Brigade advanced through artillery and musket fire with unwavering military precision,
General Riall corrected his mistake with the cry "Those are regulars, by God".

The Regiment embraced the enemy General's description, and "Regulars, by God" became the 22nd's unofficial motto.

The official motto of the Regiment is "Deeds Not Words", and was approved in 1923, along with the Regiment's Distinctive Unit Insignia.
An early use of "Deeds Not Words" can be found in General Orders No. 64 of the 22nd Infantry Regiment, dated December 10, 1894.
This order was actually the formal farewell letter to the Regiment, by the outgoing Regimental Commander, COL Peter T. Swaine.

See Insignia & Memorabilia on this website, for photos of a letter written by an officer of the Regiment, dated 1903,
using a stationery heading with the motto "Deeds Not Words".

A theory of the origin of this motto comes from Bob Babcock, President of the 22nd Infantry Regiment Society:

"In reading the history of the 22nd Infantry Regiment in the Philippines, I found a reference to General Orders No. 10, dated June 4th, 1900.
The order read, 'Captain George J. Godfrey, 22nd U.S. Infantry. Killed in action. Shot through the heart. His military record is closed.
A brilliant career ended. Deeds, silent symbols more potent than words proclaimed his soldier worth..'

My speculation is that when official regimental crests and motto's were established in the 1920's, this order eulogizing a great infantryman
who had fought in Cuba and the Philippines played a part in the establishment of our official motto - Deeds Not Words!
And our Regiment has lived up to the motto." 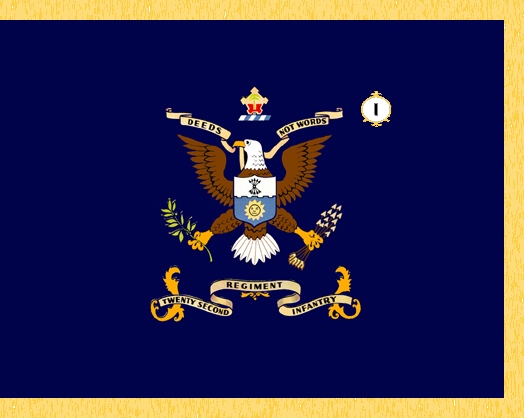 Originally authorized on June 26, 1812, the 22nd Infantry Regiment was one of a number of additional Regiments of Infantry
consitutued by Congress on that date, in an attempt to quickly rebuild the depleted United States Army.
Recruitment was done in Pennsylvania. The Regiment fought in eight battles during the War of 1812.
Its final engagement of the war was the seige and assault of Fort Erie in August and September 1814.
Inactivation of the Regiment was done after the War of 1812, by an Act of Congress approved March 3, 1815,
when its assets were incorporated into the 2nd Infantry Regiment.

Companies A and I, 22nd Infantry consolidated on 4 May 1869 and the consolidated unit was designated as Company A, 22nd Infantry.
The Regiment was brought up to strength, as the remaining Companies were filled and designated.
The 22nd Infantry served in five major campaigns of the Indian Wars of the late 19th century.
It was the first American Army unit to set foot on Cuban soil in the Spanish American War and fought with distinction at the battle of Santiago.
It served in six campaigns during the years 1899-1905 in the Philippine Insurrection and Moro Wars.

The Regiment was stationed at the Presidio in California, and served in the relief efforts during the San Francisco earthquake of 1906.
It served in Alaska from 1908-1910.

From 1910 to 1917 the 22nd Infantry saw duty along the Mexican border. From 1917-1922 the Regiment was assigned to Fort Jay
and other forts in New York, and guarded the Port of New York during the First World War.

The 22nd Infantry was assigned on 24 March 1923 to the 4th Division [later redesignated as the 4th Infantry Division].
The 1st Battalion was inactivated on 30 June 1927 at Fort McPherson, GA.

The 1st Battalion reactivated on 1 June 1940 at Fort McClellan, AL, as part of the 4th Infantry Division.
During World War II the 22nd Infantry landed on D-Day at Utah beach, and fought through five campaigns into Germany itself.
It was inactivated on 1 March l946 at Camp Butner, NC.

The 22nd Infantry was reactivated 15 July l947 at Fort Ord, CA. As part of the 4th Infantry Division the 22nd served in Germany from 1951-1956.
It reorganized and was redesignated on 1 April 1957 as Headquarters and Headquarters Company,
1st Battle Group, 22nd Infantry and remained assigned to the 4th Infantry Division (with its organic elements being concurrently constituted and activated).
It was reorganized and redesignated on 1 October l963 as the 1st Battalion, 22nd Infantry.

The Regulars of 1/22nd Infantry arrived in Vietnam in 1966, fighting in thirteen campaigns of that war.
Three Battalions of the 22nd originally went to VN with the 4th Division, but the 2nd & 3rd Battalions were soon transferred to the 25th Division.

The 1st Battalion remained with the 4th Division until the Division left VN, and then came under command of IFFV (1st Field Force).
1st Battalion earned the distinction of being the longest serving unit of the 22nd in Vietnam, 1966-1972.
During the Tet Offensive, the 1st Battalion of the 22nd earned the Valorous Unit Award, during the fighting in the Provincial Capital of Kontum.
Throughout its tenure in VN, the 1st Battalion performed its missions as a true "straight-leg" Light Infantry Battalion.
In late 1970, after the Battalion was pulled out of the jungle of the Central Highlands of II Corps, the Republic of Vietnam awarded the 1st Battalion,
for the second time during its service in Vietnam, the RVN Cross of Gallantry Unit Citation, many years before the Republic of Vietnam gave this
award as a blanket award to anyone who served in VN.

It reactivated in May 1986 at Fort Drum, NY and was assigned to the 10th Mountain Division (Light).
1st Battalion served in the aftermath of Hurricane Andrew in Florida, saw duty in Somalia
and was instrumental in returning President Aristede to power in Haiti in the 1990's.

Relieved in February 1996 from this assignment to the 10th Mountain Division (Light),
the 1st Battalion was reassigned to the 4th Infantry Division (Mechanized) at Fort Hood, TX.

1-22 Infantry became part of the Army's Test Division, and was known as Force XXI, experimenting with advanced technology
and tactics, evaluating and adpapting them to change the Army into a twenty-first century military organization.

In the summer of 2009 1st Battalion 22nd Infantry moved to their new duty station at Fort Carson, Colorado, with 4th Infantry Division (Mechanized)
in preparation for their deployment to Afghanistan.

From August 2010 to June 2011 the Battalion served in Kandahar Province, Afghanistan, adding another combat theater to their
long history of overseas deployments. The Battalion returned to Fort Carson, where they served and continued to train,
maintaining a state of readiness should the nation require their service anywhere in the world.

BATTLES AND HISTORY OF 1ST BATTALION: