Charles Frederick Storey Waddington was born June 22, 1883 in Cooma, New South Wales, Australia, the son of
Isaac and Florence Waddington. Charles was the first born of six children. Charles' father was a 2nd Dragoon Guard
in Yorkshire, England in 1876 and arrived in Australia in about 1877. Isaac was the son of Joshua Waddington and
Sarah Storey of Knaresborough Yorkshire England.

Charles came from a family of musicians. He was a cornet player and his father and brother were also musicians.
His brother Robert was a bassplayer who played with Frank Ellis and the Californians during the dance craze
in Australia in the 1920's, and later recorded with Gladys Moncreiff in the 1930's. 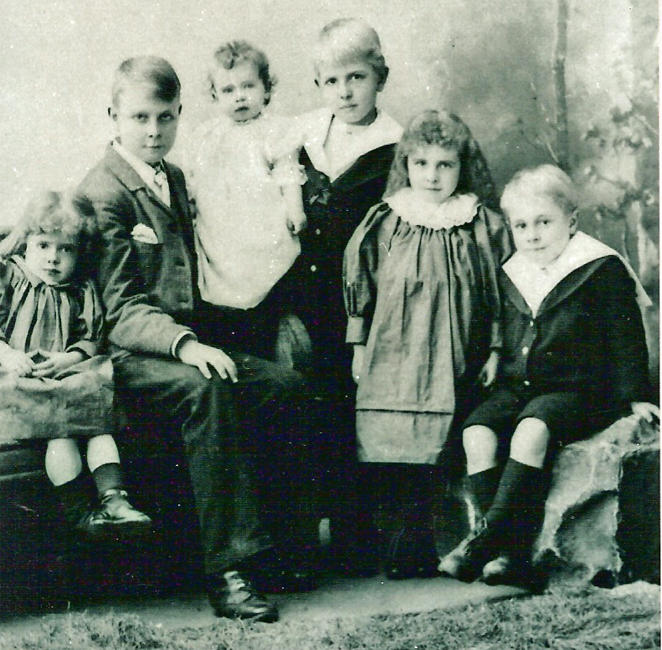 The Waddington children. Charles is second from the left.

Charles immigrated to the United States in 1905. He enlisted in the United States Army on December 2, 1907
at Fort Slocum, New York. His record of enlistment indicated he had blue eyes, light brown hair, a fair complexion
and stood five feet ten inches tall. His civilian occupation was indicated as musician. He was assigned to the 15th Cavalry Band.
He was discharged on December 1, 1910 at Fort Myer, Virginia as a Chief Musician with a character rating of Excellent.

He re-enlisted at Fort Myer on December 4, 1910 and was assigned to the 7th Recruit Company Band at Columbus Barracks, Ohio.
On April 17, 1912 Charles was transferred as a Private to the 22nd Infantry Regimental Band stationed at Fort Bliss, Texas.

The 22nd Infantry Regimental Band. Photo taken most likely at Camp Harry Jones, Arizona in 1917.
Charles F. S. Waddington is standing on the far left. At the time he was a Chief Musician and conductor
of the 22nd Infantry Band.

Charles re-enlisted at Texas City, Texas on December 4, 1913 and continued to lead the 22nd Infantry Band
as the Regiment served on the Mexican Border. He went with the Regiment to Fort Jay, New York in 1917.
He became a naturalized American citizen in 1918. On July 15, 1918 he was given an honorable discharge
in order to accept a commission.

On July 16, 1918 Charles accepted the commission of a 1st Lieutenant of Infantry in the wartime temporary
National Army. He continued to serve as an officer with the 22nd Infantry at Fort Jay on Governors Island,
New York. With the demobilzation of the Army after World War One he was honorably discharged on April 5, 1919.

The 1920 Census showed him living in Los Angeles, California where he was employed as a Theatre Musician.

Charles was back in uniform as an Army Warrant Officer from March 1, 1928 to April 3, 1931. He was the leader
and conductor of the 12th Cavalry Band stationed at Brownsville, Texas. The 1930 Census showed him living with
his wife Luella and daughter Alice at Fort Brown, Brownsville, Cameron County, Texas where he was employed
as a Warrant Officer with the United States Army. He was discharged from the Army on April 3, 1931. 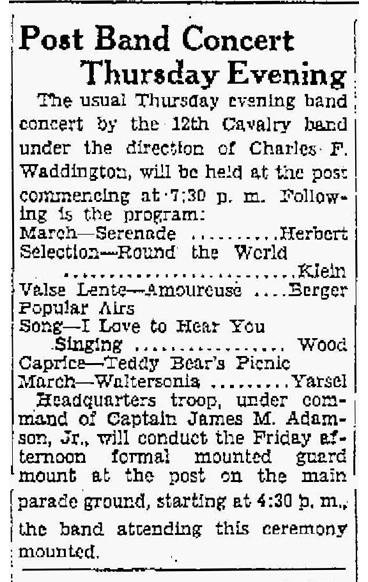 Newspaper clipping announcing the weekly concert given by
Charles F. Waddington and the 12th Cavalry Band at Fort Brown, Texas.

From The Brownsville Herald Thursday September 18, 1930 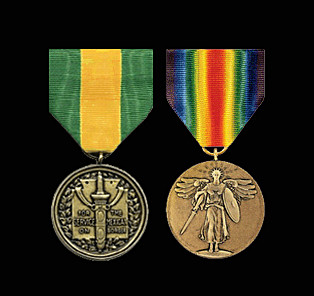 Charles F. S. Waddington died at the age of 64 on January 3, 1948 and is buried in
Lone Oak Cemetery, Lewisburg, Marshall County, Tennessee.