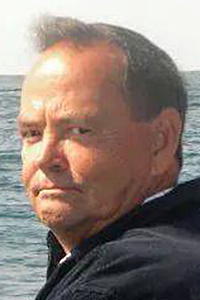 Robin Darryl Wibbens, 69,
passed away at home peacefully in his sleep
surrounded by his family on a sunny Saturday morning.

Robin was born and raised in Albany.
He graduated from Albany Union High in 1964.

At 19 years of age, he enlisted in the United States Army
and received two Purple Hearts
for his service in Vietnam between 1965 and 1967.

In 1968 he married his wife, Linda Kay Robinson,
and together they raised a family for the next 46 years.

After the war Robin resumed his employment
at Stone Forest Industries and continued to work there
for more than 20 years.

He later accepted a position with the US Postal Service
where he worked as a rural carrier until retirement.

Robin was an avid outdoorsman who loved fishing
and hunting trips with his family.
Large family gatherings with weekend campfires
and Sunday dinners spent together were the norm.

He was known as a practical joker and a “pretty poet.”

He enjoyed card games, trips to the beach and antiquing.
His two biggest passions in life were his family
and his gardens.

He was a hard worker and a gentle soul;
a great man who was greatly loved.

Robin is survived by his wife:
Linda Wibbens;

He is preceded in death by his three children:
Tinna Wibbens-Om,
Darryl Scott Wibbens and
Leah Anna Wibbens;

A celebration of life will be at 5 p.m.
Friday, Aug. 22, at AAsum Dufour Funeral Home.
Reception at the family's home is immediately following.

Obituary from the Albany Democrat-Herald

Don "Gert" Gertenrich, who served with Robin Wibbens in Vietnam had the following memory of Robin:

Robin was much more than a friend.
He was part of my foundation.
He was my brother in arms and keeper of the key.
He knew what it takes for men to be free.
We share a pain so deep in our souls
that few will ever understand.
If you've been there you know.
Robin knew, you can see it in his eyes and
over the years I heard it, buried in his heart.
He served when serving was toughest.
Always faithful and loved his family.
Never forgot.
Hand salute Robin, who is on to better things.
Gert